The children’s theatre troupe, a part of the “Razvitie 1870” Community Center, was created in 2010 and is the newest addition to the art of theatre in our town. Our youngest actors showed their talent as early as their first theatrical season, earning numerous collective and individual awards from various theatre festivals in Bulgaria, including:

In addition, they participate and play a big part in the preparation of our local festival – “The Theatre Wizard”.

The repertoire of the children’s troupe includes a wide variety of plays – from classical Bulgarian and foreign fairy tales to modern dramatic works from Bulgarian authors – Nedyalko Yordanov, Pancho Panchev, N. Parushev and Magda Borisova. During the last theatrical season, the young actors presented a stage adaptation of a play by Nikola Rusev, called “The Yellow Eye”. Nikola Rusev is a playwright and screenwriter is from the generation of authors who represent the second half of the twentieth century. He offered the following words of wisdom to the younger generations: “If you’re a friend of wisdom, you have to be a friend of fairy tales”, as well as “To grow up, you have to read fairy tales. The good ones, the ones that have more wisdom than special effects.”

The play “The Yellow Eye” holds a special place among Rusev’s works. It’s aimed at both children and adults alike. It takes place in “our forest”, in which all manner of animals live: cowardly and subservient, smart and crafty, vain and loud… And ruling them all is a greedy and cruel ruler, who does as he pleases as no one is brave enough to stand against him. Until one day, an old sage shows the inhabitants of the forest the way to freedom.

Witnessing this, the audience sees some of our youngest, but also most enthusiastic actors who entertain themselves and everyone around them, showing the artistic skills required to one day become masters of the craft.

The latest play on which the children’s troupe is working is called “Maya’s amazing adventure in the land of the colorless” from the young, but very talented writer – Magda Borisova. 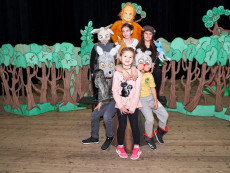